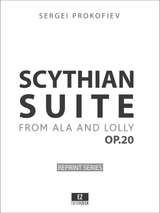 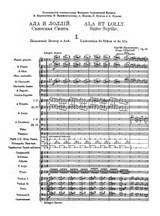 The suite is in four movements, and lasts around 20 minutes. It is based on Prokofiev's ballet "Ala e Lolli" (Ala and Lolly).

1. Invocation to Veles and Ala - barbaric and colorful music describing the Scythians' invocation of the sun
2. The Evil God and the Dance of the Pagan Monsters (also known as "The Alien God and the Dance of the Evil Spirits"[2])—as the Scythians make a sacrifice to Ala, daughter of Veles, the Evil God performs a violent dance surrounded by seven monsters
3. Night - the Evil God harms Ala; the Moon Maidens descend to console her
4. The Glorious Departure of Lolli and the Cortège of the Sun - Lolli, the hero, comes to save Ala; the Sun God assists him in defeating the Evil God. They are victorious, and the suite ends with a musical picture of the sunrise.

The music is the product of a 23 year old Prokofiev, yet it clearly demonstrates the unmistakable confidence, control, and imagination of a seasoned master.

Extra Strings:
available when purchasing the Set of Parts