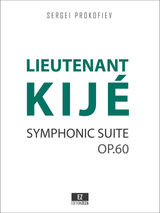 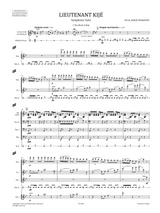 Composed in 1933, for the film "Lieutenant Kijé". The troika is frequently used in films and documentaries for Christmas scenes and scenes involving snow.

The suite, in five movements broadly follows the plot of the movie:
1. Kijé's Birth: A soldier, while writing out the morning orders for the Imperial majesty Tsar Paul, miscopies two words, creating a Lieutenant "Kijé". The Tsar learns of his "existence", and issues numerous orders concerning him. The palace administrators have no choice but to carry them out.
2. Romance. The fictional lieutenant falls in love.
3. Kijé's Wedding. Since the Tsar prefers his heroic soldiers to be married, the administrators concoct a fake wedding.
4. Troika: A festive frolic on a three-horse open sleigh, or maybe at some deeper, more meaningful level a subtle symbol of the madcap paper juggernaut, or just Prokofiev showing off - conjuring sleighbells by sleight of hand?
5. Kijé's Burial. The administrators finally rid themselves of the non-existent lieutenant by saying he has died.