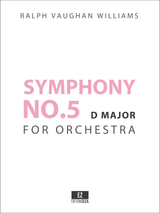 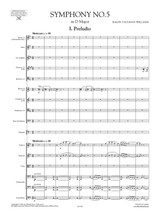 In style it represents a shift away from the violent dissonance of the Fourth Symphony, and a return to the more romantic style of the earlier Pastoral Symphony. It is also noteworthy as perhaps the quietest symphony Vaughan Williams ever wrote, with only a very few passages rising even to a forte.

Many of the musical themes in the Fifth Symphony stem from Vaughan Williams' then-unfinished operatic work, The Pilgrim's Progress. This opera, or "morality" as Vaughan Williams preferred to call it, had been in gestation for decades, and the composer had temporarily abandoned it at the time the symphony was conceived. Despite its origins, the symphony is without programmatic context, and is in the form of an extended development of musical themes taken from the morality rather than an attempt to cast it directly into symphonic form.