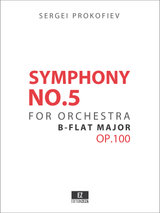 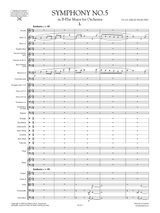 Prokofiev's Symphony No. 5, Op. 100, is his biggest, his grandest, and his greatest symphony, a massive and monumental work that celebrates the triumph of all that is decent and virtuous over all that is depraved and immoral. Fourteen years had passed since Prokofiev's last symphony.

The piece is in four movements, lasting 40–45 minutes:

The first movement embodies what Prokofiev envisioned as the glory of the human spirit. In a tightly argued sonata form, there is an elaborate and climactic development of the two themes - one calm and sustained, the other soaring with tremolo accompaniment from strings - after the exposition section. It represents the pinnacle in Prokofiev's symphonic thought. The movement is wrapped up with an electrifying coda, punctuated by a roaring tam-tam and low piano tremolos.

The second movement is an insistent scherzo in Prokofiev's typical toccata mode, framing a central country dance in triple time.

The third movement is a dreamy slow movement, full of nostalgia, which nevertheless builds up to a tortured climax, before receding back to dreaminess.

The finale starts with a cello choir playing a slow introduction containing elements from the first theme of the first movement, which then launches into the movement proper, a rondo. The playful ("giocoso") main theme is contrasted with two calmer episodes, one played by the flute, the other a chorale on strings. At the end, just as the movement is striving to end in a victorious tone, the music unexpectedly degenerates into a manic frenzy (rehearsal mark 111), which is then interrupted by a string quartet playing staccato "wrong notes" (rehearsal mark 113) with rude interjections from low trumpets, making the ultimate B-flat major chord sound all the more ironic.