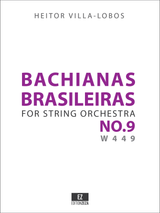 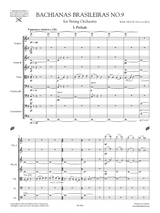 Bachianas Brasileiras No. 9 is the only one that does not have double titles (one title based on classical music forms and the other relating to Brazil in some manner). This 10 minute work is in quintessentially Bachian form of the prelude and fugue.

The work is scored for string orchestra (Villa-Lobos also wrote a version of it for wordless choir, but this is rarely performed). The opening, marked with the Italian direction "vague and mystical" begins with a striking sonority using high strings. A very Bachian aria melody unfolds, with harmonization that is often bitonal. The concluding fugue (this Bachiana being one of four in the series that end in a fugue) has a typical quick subject. It rises to a strong and calm conclusion that is a fitting end to one of the most famous series of classical compositions ever written in South America.