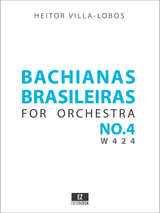 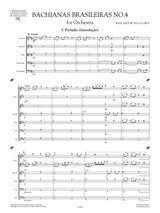 As is the usual case with Bachianas Brasileiras, Villa-Lobos stressed the conjunction of Bach and Brazil by giving dual titles in Portuguese to each movement, one reflecting a Bach form, the other suggesting the Brazilian nature of the music.

The first movement is called, somewhat redundantly, "Prelúdio; Introduçao." It is a monothematic movement in B minor with a theme whose Bachian quality is the first aspect to strike the listener. Later rhythmic development adds Brazilian elements to it, but the movement never departs from working with the single theme.

The second movement is also notable for a smooth and graceful melody. "Coral; Canto do sertão" (Chorale; Song of the Sertão) is also in a slow tempo, being marked "largo," with a faster middle section. The Sertão is the dry brushland country of the northeastern part of Brazil, which has its own distinct folk music.

Unusually in this series Villa-Lobos uses a genuine folk tune in the third movement, "Aria; Cantiga." (Both the Bachian word and the Brazilian mean, essentially, "song"). The folk song is from the northeast and is called "O mana, Deix'eu ir" (Oh, sister, let me go). Villa-Lobos uses his favorite form for a Bachiana movement, a slowish (Moderato) opening and closing section contrasting with a fast (Vivace) central section. Brilliant Brazilian rhythms add a festive tone.

The final movement, "Dansa; Miudinho," uses the samba-like rhythms of the dance called the miudinho. This movement is rhythmically insistent and remains in the fast tempo of Molto animato.