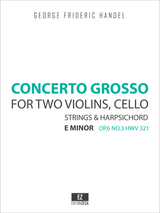 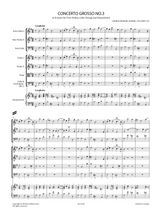 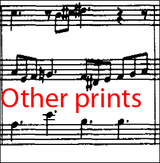 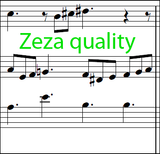 The Handel concerti grossi Op.6 or Twelve Grand Concertos, HWV 319-330, are 12 concerti grossi by George Frideric Handel for a concertino trio of two violins and violoncello and a ripieno four-part string orchestra with harpsichord continuo.

Concerto Grosso Op.6 No.3 HWV321:
In the opening larghetto in E minor the full orchestra three times plays the ritornello, a sarabande of serious gravity. The profoundly tragic mood continues in the following andante, one of Handel's most personal statements. The third movement is an allegro. Of all the Op.6, it comes the closest to Vivaldi's concerto writing, with its stern opening unison ritornello; however, despite a clear difference in texture between the solo violin sections and the orchestral tuttis, Handel breaks from the model by sharing material between both groups. Although the charming and graceful fourth movement in G major is described as a polonaise, it has very few features in common with this popular eighteenth century dance form. The final short allegro, ma non troppo in 6/8 time brings the concerto back to E minor and a more serious mood, with chromaticism and unexpected key changes in the dialogue between concertino and ripieno.

Bruch - Violin Concerto in D minor No.2 Op.44 for Violin and Orchestra