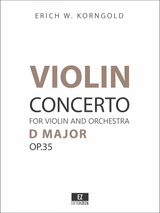 The concerto was dedicated to Alma Mahler, the widow of Korngold's childhood mentor Gustav Mahler. It was premiered on 15 February 1947 by Jascha Heifetz and the St. Louis Symphony under conductor Vladimir Golschmann.

Three Movements:
1.Moderato nobile: The magnificent soaring violin solo which opens the concerto is a theme from Another Dawn (1937), running over two octaves in five notes. Juarez (1939) provided the second theme, more expansive and reliant upon the orchestra.
2.Romanze: A solo clarinet introduces the principal theme of the slow movement, quoted from Anthony Adverse (1936) and revisited after a contrasting middle section that seems to have been uniquely composed for the concerto.
3.Allegro assai vivace: The most demanding movement for the soloist begins with a staccato jig, which leads to a second theme based on the main motif from The Prince and the Pauper (1937) and builds up to a virtuoso climax.