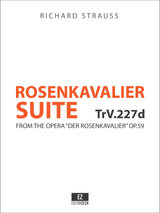 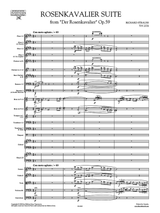 The suite begins with the opera's orchestral prelude, depicting the night of passion (vividly portrayed by whooping horns) between the Marschallin and Octavian. Next comes the appearance of Octavian as the "Rosenkavalier", which is depicted in tender music; the sight of him looking so young makes the Marschallin realise that he will soon leave her for a younger woman.
There follows the duet between Octavian and Sophie (oboe and horn) – in which their love for each other becomes ever more obvious, but this is abruptly interrupted by the discordant music associated with the clumsy arrival of Ochs. Next the violins tentatively introduce the first waltz, which is followed by another given out by the solo violin, before the whole orchestra settles into waltz mode. A general pause and a violin solo leads into the nostalgic music where the Marschallin sadly realises she has lost Octavian. Then comes its ecstatic climax. The work closes with a singularly robust waltz, depicting Ochs at his most pompous, and a boisterous coda newly composed for the suite.