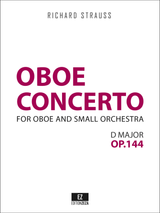 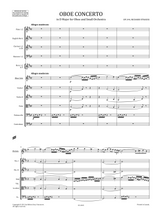 Written in 1945, it was one of the last works that Richard Strauss composed near the end of his life, during an "Indian summer". This delightful Oboe Concerto has a lovely, warm lyrical theme, and a spirited finale. It ranks as one of the finest works ever composed for the instrument.

Strauss wrote the concerto at the suggestion of John De Lancie, an American soldier and professional oboist stationed near Garmisch at the end of the Second World War. The concerto is notable for Strauss' economical scoring which is characteristic of his later compositions, compared to the expansive instrumentation of his earlier symphonic poems and operas.

Other:
Set of Parts includes Clarinet in Bb transposed into A.