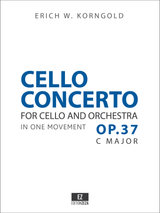 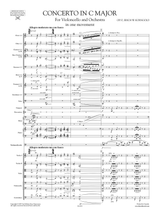 Korngold - Concerto for Violoncello and Orchestra in C Major, Op.37

This romantic and dramatic score is actually a single-movement, thirteen-minute piece for cello and orchestra written to be played in a film called Deception, about a love triangle between a cellist, a composer, and the cellist's student, played by Bette Davis.

Davis's character shoots the cellist and so gets to play the premiere of the concerto. Korngold wrote a complete and coherent piece of music, knowing that only portions of it could be depicted in the film. Desiring to revive his "serious" composing career, he arranged to have the complete piece published as this concerto.

The mood of the piece is stormy and dramatic, befitting its use as the object of murder in the movie. The opening theme is turbulent, uneasily shifting from C major to minor. The second theme is highly lyrical. After a cadenza for the cello the lyrical theme becomes the basis for an extended slow section which serves the purpose of a slow movement. The recapitulation section serves as the final fast movement, including an extended development of the first theme. Another virtuoso cadenza leads into a final, grand statement of the lyrical second theme.