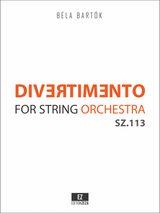 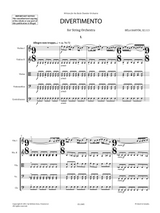 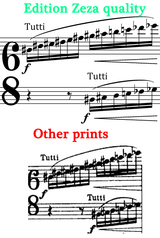 Divertimento for String Orchestra Sz.113 BB.118 is a three-movement piece that conforms to traditional structures, respectively, of sonata form, ternary form and rondo form. It was composed in 1939 and dedicated to the Basel Chamber Orchestra.

1. Allegro non troppo: Typically 8 minutes long, the opening movement is presented as a waltz with specific gypsy influences evident melodically, through the use of various modes and non-traditional scales, and rhythmically, through the use of irregularly placed accents and extended syncopated rhythms. Metrically, the movement is set in shifting, regular compound meters that at times evoke both a clear or equally murky beat placement.

2. Molto adagio: The 8 minute long second movement is very slow and dark music. The movement is presented in ternary form, another neoclassical influence. Harmonically and melodically, it is less traditional and less oriented to the neoclassical style than the previous movement, at times, stretching tonality to the brink of atonality.

3. Allegro assai: The 6 minute finale is quick, dance-like and in rondo form. Harmonically, this movement is more clearly modal and less dissonant than the previous movement. This movement is full of imitation both as single solo voices and as a full ensemble. Variation of texture is again achieved by the contrast of solo voices and full orchestra.