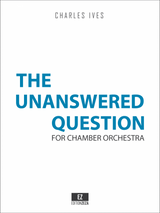 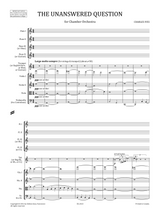 In Charles Ives's most famous work The Unanswered Question, a miniature he called a "cosmic drama," one finds distilled his revolutionary means, and more importantly the ends of his singular art. The piece is a kind of collage in three distinct layers, roughly coordinated.

The full title Ives originally gave the piece was "A Contemplation of a Serious Matter" or "The Unanswered Perennial Question". His biographer Jan Swafford called it "a kind of collage in three distinct layers, roughly coordinated." The three layers involve the scoring for a woodwind quartet, solo trumpet, and offstage string quartet. Each layer has its own tempo and key. Ives himself described the work as a "cosmic landscape" in which the strings represent "the Silences of the Druids—who Know, See and Hear Nothing." The trumpet then asks "The Perennial Question of Existence" and the woodwinds seek "The Invisible Answer", but abandon it in frustration, so that ultimately the question is answered only by the "Silences".

Ives polished the score in 1908, then from 1930-1935 he worked on a version of The Unanswered Question for orchestra.