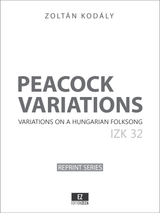 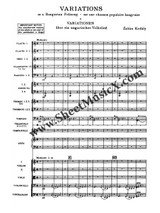 As admirers of Kodály are aware, the composer was well known for his work in ethnomusicology. The Peacock Variations falls into this vast realm of the composer's output, using a melody that has Hungarian and possibly Mari roots and apparently dating back over 1,500 years, as the composer asserted in a brief note about the work in 1966. The melody was used in a popular Hungarian folk song entitled Fly, Peacock.

The Peacock Variations opens with a brief, slow introduction based on the tune, after which the oboe takes up the melody, enhancing its exoticism and songful, lively character. There follow 16 variations and a finale, the whole piece lasting about 25 minutes. The first three variations (marked, respectively, Con brio, Staccato leggiero, Appassionato) are lively and very short, the last having a rollicking, especially colorful manner. The next (Poco calmato), also a mere half-minute or so, is subdued, but the music quickly fills with tension in the ensuing variant (Appassionato), only to turn tranquil again in the sixth (Calmato).

The Vivo number seven is jolly and bright, and could almost be mistaken for the more folkish music of Vaughan Williams. The next variation (Piu vivo) is also much in that same chipper vein, but contrast is again strongly felt in number nine, among the most lyrical and lovely of the variations, the music here soaring to the swirling caresses of the clarinet. The next variant (Molto vivo) is chipper, featuring pizzicato strings and jaunty winds.

The English horn and strings impart rich exoticism in the following variation (Andante espressivo), and that same character is retained but greatly intensified in the ensuing Adagio, which, at over three minutes, is the longest and probably darkest of the 16 variations. Number 13 (Tempo di marcia funebre) also has a grimness to its funereal tread, but the generally lighter character of the work returns with the following variation (Andante), which summons images of the peacock in flight, with deftly dreamy writing for the piccolo.

Lively music finally returns with the jolly and bright number 15 (Allegro giocoso) and the ensuing stately 16th variation (Maestoso). The piece closes with its longest section, the finale. Here much of the work's thematic ideas reappear in different guises in generally lively and colorful orchestration, crowning this charming composition with a mixture of triumph and folk-like festivity.

Spohr, L. - Fantasy and Variations Op.81 for Clarinet and Strings

Glazunov, A. - Theme and Variations in G minor for String Orchestra Op.97