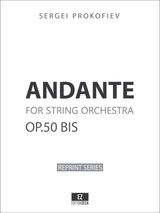 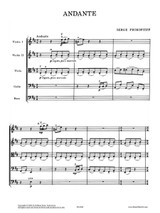 After he departed the Soviet Union in 1918, Sergei Prokofiev (1891 - 1953) spent a fair amount of time in the U.S. concertizing. On one such tour in 1930, the Library of Congress commissioned him to compose a string quartet; the resulting String Quartet No. 1, Op. 50 is generally regarded as one of his finest chamber efforts. The finale so pleased Prokofiev that he immediately transcribed it for string orchestra.

If there is a greater intimacy in the string quartet scoring, this larger version, which remains quite faithful to the original, gives the music's tension and gloom a rawer and colder edge. In either version, one will notice the profound and subtle unfolding of the thematic material -- its ideas seeming to grow out of the melodic and harmonic fabric naturally. There are two themes, the first rather terse, the second longer and more lyrical. After two elaborate expositions of the material, which involve considerable thematic development, the music intensifies and reverts to a revisiting of the second theme, the agitated mood subsiding and the piece ending quietly.