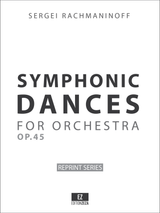 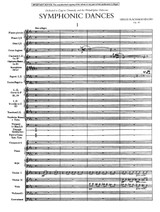 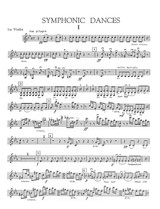 The Symphonic Dances Op. 45, is an orchestral suite in three movements. It is Rachmaninoff's last composition.

The work is fully representative of the composer's later style with its curious, shifting harmonies, the almost Prokofiev-like grotesquerie of the outer movements and the focus on individual instrumental tone colors throughout (highlighted by his use of an alto saxophone in the opening dance).The opening three-note motif, introduced quietly but soon reinforced by heavily staccato chords and responsible for much of the movement's rhythmic vitality, is reminiscent of the Queen of Shemakha's theme in Rimsky-Korsakov's opera The Golden Cockerel, the only music by another composer that he had taken out of Russia with him in 1917.

The Dances allowed him to indulge in a nostalgia for the Russia he had known, much as he had done in the Third Symphony, as well as to effectively sum up his lifelong fascination with ecclesiastical chants. In the first dance, he quotes the opening theme of his First Symphony, itself derived from motifs characteristic of Russian church music. In the finale he quotes both the Dies Irae and the chant "Blessed be the Lord" (Blagosloven yesi, Gospodi) from his All-Night Vigil.

Rachmaninoff - Vocalise Op.34 No.14 for Violin and Orchestra

Rachmaninoff - Vocalise Op.34 No.14 in C Sharp minor for Soprano and Orchestra

Rachmaninoff: Rhapsody of a Theme of Paganini Op.43