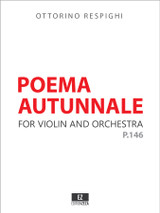 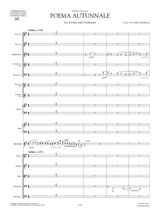 The Poema Autunnale of 1925 was written for Mario Corti and dedicated to him. Once again Respighi ventured into Lark Ascending territory, as much of the writing was modal, creating the desired archaic atmosphere, and double-stops were much used for effect. The composer had in mind a programme conveying the “sweet melancholy” of an autumn day, enlivened at one point by a Dionysian dance until finally the great god Pan “wandered lonely across the fields under falling golden leaves”. Rather than have the woodwinds evoke Pan’s pipes, Respighi allotted this task to the solo violin. The première was given in Berlin by Georg Kulenkampff, on 12 January 1926, with Emil Bohnke conducting the Berlin Symphony Orchestra. The first American performances were with piano, which rather defeated the object of this romantic tone poem: Sante lo Priore played it at Aeolian Hall, New York, in 1926, partnered by Maria Carreras; and in 1927 Respighi himself accompanied Francis Macmillen at Carnegie Hall. In Italy, apart from Corti, the distinguished violinist Arrigo Serato championed the piece, giving the Roman première at the Augusteo in 1929 with Molinari.