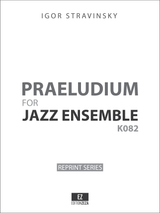 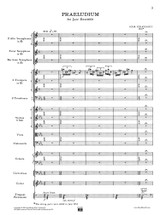 About half of Praeludium was composed in Paris, the remainder having been worked out during one of Stravinsky's trips to the United States in early 1937. With a work as concise and polished as this one, however, it is difficult to discern any distinction between the European product and the American product. This differs markedly from, for instance, the Symphony in C, whose four movements were composed in four different locales, each movement bearing traits of its place of origin.

The Praeludium, though short, is highly sectional. A solo trumpet, supported (and briefly prefaced by) a snare drum roll, begins the action with a sprightly lick that begins to set up one of the basic structural components of the piece: the pitch group G sharp-B-E-G natural. The roles of these two instruments (or players, in the case of the percussion) is immediately reversed, as the trumpet transforms the snare drum role into a held G natural and the percussion (now pitched) elaborates on the material given by the trumpet. So far there has been little to suggest a jazz idiom, but the entrance of colorfully punctuated tutti neighbor-note figures and a sly saxophone solo confirm the character (or, perhaps, one of the characters) of the piece. A few solo strings offer their thoughts, and a saxophone duet takes over. The trumpet/percussion dialogue returns, briefly, before a final cadence to a jazz-colored E major chord is made.