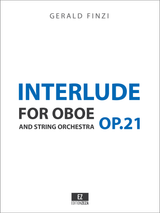 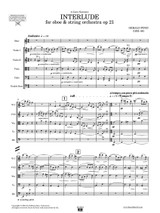 The Interlude for oboe and strings was composed during the mid 1930s, originally for string quartet; later Finzi created an expanded instrumentation for string orchestra as an alternative. It is a 13-minute work of considerable substance, despite the self-effacing subordination implied by the title, with a dramatic intensity and concentration of effect rather uncharacteristic of the composer. Its expressive power is conveyed with far more impact in the fuller instrumentation, heard here in its first recording. Finzi enthusiasts should take note of this important item in the composer’s canon.

Finzi: Introit for Violin and Orchestra