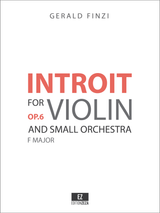 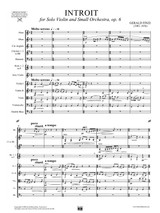 Finzi, who constantly revised his own work, could not bring himself to rest contentedly with the outer movements of his Violin Concerto. However, the central section became established during the composer’s lifetime as a piece in its own right. It is described in the score as "a short work in the nature of a concertante movement, with an orchestral accompaniment almost as important as the solo violin part. Marked molto sereno, it is in a mood of quiet rapture throughout." With its ever soaring solo line, the spirit of the music has much in common with Vaughan Williams’s The Lark Ascending.

Bach - Violin Concerto in A minor No.1 BWV 1041 for Violin and Orchestra

Kreisler - Liebesleid for Violin and Orchestra