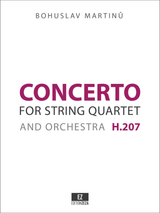 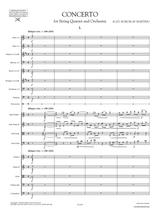 The Concerto for string quartet with orchestra was composed in Paris in 1931 for the Belgian Quatuor Pro Arte to which Béla Bartók had already dedicated his fourth string quartet. The work keeps the string quartet distinct from the orchestra throughout.

In this work, Martinů for the first time tried his hand at the concerto grosso form, which subsequently he was to use frequently and later even called his favourite form because it was what made him feel 'within in the heart of music'. In the concerto, the string quartet conducts a dialogue with the classically sized orchestra as if it were a solo instrument. The first movement, composed in a brusque tone, is based on the development and variation of a single motif, followed by a sombre, freely conceived adagio which, using chromaticism, rises to a shattering climax. The lively final movement in rondo form is a conciliatory conclusion to his Concerto which proved to be a decisive factor in the international success of Martinů.