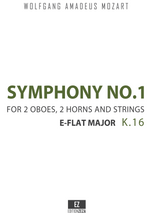 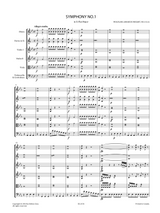 The Symphony No. 1 in E-flat major, KV. 16, was written in 1764 by Wolfgang Amadeus Mozart at the age of just eight years. By this time, he was already notable in Europe as a wunderkind performer, but had composed little music.

The symphony is written for an orchestra  consisting of two oboes, two horns and strings (the usual first and second violins, violas, cellos and double basses). It is laid out in a three-movement, quick-slow-quick form, reflecting the genre's origins in the Italian overture, and typical of the early classical symphony:

The second is slower, in the relative key of C minor, with an almost constant accompaniment of semiquaver (sixteenth note) triplets. The movement focuses on tone color rather than any melodic ideas.

Hindemith: Symphony in B Flat Major for Band