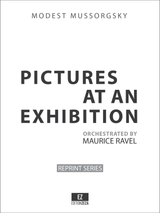 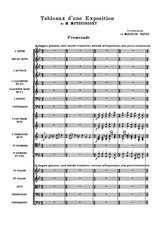 Mussorgsky's inspiration for Pictures was the death of his dear friend, the architect and visual artist Victor Hartman. Having died at age 39, Hartman had not yet had the opportunity to realize any of his architectural visions, and Mussorgsky was angered that his friend would have no legacy.

The Architects' Society arranged an exhibition of some of Hartman's sketches – some of architecture, others of characters or scenes from everyday life. The tribute was enough to give Mussorgsky ideas for his composition, but not enough to give Hartman any lasting place in history. Today, of all of the sketches that were captured in music, only six can be positively identified.

However, Mussorgsky's collection has a little-known secret: of the ten pictures illustrated, only three actually appeared in the exhibition that he attended: The Ballet of the Unhatched Chicks (from a costume design), Baba Yaga's Hut, and The Great Gate of Kiev (from a design that was never built). Of the others, most of were based on pencil drawings, some from Mussorgsky's private collection and others that he had seen elsewhere. The Gnome was a design for a toy nutcracker; Tuileries was a scene of an empty garden (with no quarreling children); Bydlo (Polish for ``cattle'') was probably a drawing of an oxcart; Samuel Goldenberg and Schmuyle were separate drawings; and the Catacombs were a somewhat fanciful drawing that pictured the artist in the Paris tombs. Finally, two images ( The Old Castle and The Market Place at Limoges) seem to have been invented by the composer out of whole cloth.

We now come to Ravel, the master orchestrater. Mussorgsky's piano writing in the suite is as picturesque as can be, achieving mystery, frenzy, humor, and grandeur. It is a work that cries out for orchestral color, and several subsequent composers have been unable to resist the challenge. The first appears to have been the Russian Toushmalov, but the greatest arrangement is unquestionably Ravel's. A man who would spend hours interviewing instrumentalists to discover new possibilities, yet who had a talent for absorbing different styles, he was the perfect candidate to turn the piano suite into a concert-hall showpiece. In every movement, he selected precisely the right combination of instruments needed to duplicate Mussorgsky's original atmosphere, rising to a grand and glorious finale that leaves the listener feeling as if he had traveled to Kiev specifically to stand in front of that majestic, tragically nonexistent gate.

Mussorgsky, M. - Night on the Bare Mountain for Piano