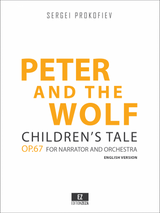 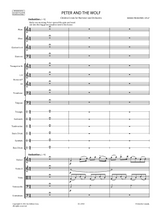 Peter and the Wolf, for narrator and orchestra, was composed in 1936 and is recognized as one of Prokofiev's most famous works. It's a children's story, with both music and text by the composer himself, composed in just four days. Each character is represented by an instrument and a musical theme.

The bird is represented by a flute,  the duck by an oboe, the grandfather by a bassoon, the cat by a clarinet, the wolf by three horns, the hunters by a woodwind theme, with gunshots on timpani and bass drum, and Peter by the strings. The opening section introduces each character; the middle section contains the development: the appearance of the wolf, the duck being swallowed alive by the wolf, and his capture by this story's hero, Peter. The final scene brings all characters together, in a triumphant march to the zoo.

Extra Strings:
only available when buying the Set of Parts