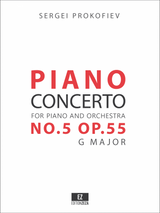 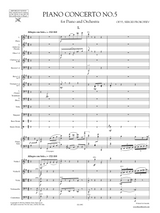 Prokofiev's last piano concerto dates from 1932 and is in five short movements.The longest, a Larghetto, is around seven minutes in length. The remaining four movements are all in a fast tempo and feature virtuoso keyboard writing; the third movement, only around two minutes long, functions as a variation on the first.

The concerto exudes a particularly boisterous, even blustering atmosphere. The movements one to three feature similar themes, the first and third begin similarly, all three captivate largely by their rhythm. The second begins with lightning glissandi, introducing a dancing theme, later contrasted by more spreading motions. It ends in curiosity.
The fourth movement comes as a bit of a surprise after what seems to be a fairly closed work. It is the longest and accordingly the slowest of all and has a climax of heroic grandeur. The Vivo opens poignantly, then goes over into a quieter mood, making use of the unconventional Locrian mode. The concerto ends at a blazing volume.