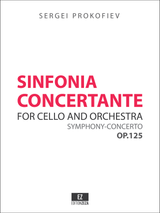 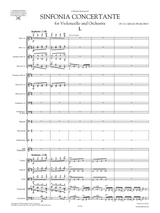 Also known as Symphony-Concerto in E minor, Op. 125,  it is a reworking of the Cello Concerto Op.58.  This "Sinfonia Concertante" is a large-scale work for cello and orchestra, dedicated to Mstislav Rostropovich.

The three movements are all expansive, with a wide variety of themes and speeds, justifying the symphonic implications of the title. The solo part calls for a player of exceptional technique and musicality, sometimes to the point that Rostropovich asked the composer to provide easier alternatives for lesser players. These alternatives, needless to say, are ignored by today’s many gifted players.

While the second movement is the largest, combining the functions of a conventional first movement and scherzo, the slow movement comes first, with a broad Andante tempo and a motive of four rising notes clearly stated at the outset. This theme is also prominent in the ballet Romeo and Juliet, whose mood and lyrical tone is often echoed here. A striking later section has soft high strings descending along a steady scale while the basses tread a rising scale to meet them.

The second movement begins as a brisk scherzo, with energetic action from the soloist. The brass intrude rudely from time to time. Eventually the pace slackens and the soloist’s elegant rhapsodizing leads to a cadenza. This gets gradually faster, as cadenzas often do, and so leads naturally back to a return of the jumpy music from the beginning not for a brief coda, but for an extended review of earlier themes and more high-wire display from the cello.

The finale has the character of variations on a broad, lyrical theme presented at the start by the soloist. Its middle section is announced by the bassoon in its jauntiest mood. The main theme returns like a chorale, and then the celesta duets charmingly with the cello. At the end the cello ascends the heights, in Rostropovich's words, “as if spiraling up to the very summit of a domed roof,” stopped only by the thumps of the timpani.