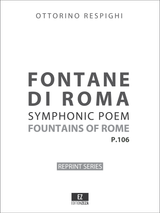 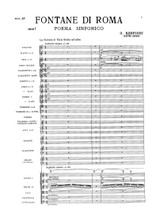 Fountains of Rome or Fontane di Roma is a symphonic poem written by Ottorino Respighi in 1916 and first published in 1918. It is the first orchestral work in his "Roman trilogy", followed by Pines of Rome (1924) and Roman Festivals (1928). Each of the four movements depicts one of Rome’s fountains at a different time of the day.

The first section, The Fountain of Valle Giulia at Dawn (La fontana di Valle Giulia all'Alba), shows this fountain at daybreak in a pastoral landscape which cattle pass through during the morning.

In the second section, The Triton Fountain in the Morning (La fontana del Tritone al mattino), depicts Naiads and Tritons dancing in the morning light, as figures of the Bernini fountain are seen nearby. Gods and goddesses using conch shells are portrayed by the French horn.

The third section, The Trevi Fountain at Noon (La fontana di Trevi al meriggio), is ushered in by a triumph giving news of a recent victory by the god Neptune.

The final section, The Villa Medici Fountain at Sunset (La fontana di Villa Medici al tramonto), portrays a much more melancholic atmosphere, as the brilliance of the sun fades.