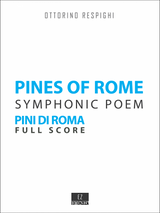 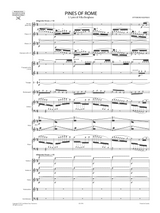 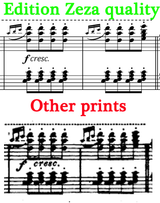 Pines of Rome (Pini di Roma) is a symphonic poem written in 1924 and forms one-third of Respighi's so called Roman trilogy, along with Fontane di Roma and Feste Romane. The piece was used in the film "Fantasia 2000".

Sections:
1. I pini di Villa Borghese:  "Children are at play in the pine groves of Villa Borghese; they dance round in circles. They play at soldiers, marching and fighting, they are wrought up by their own cries like swallows at evening, they come and go in swarms."

2. Pini presso una catacomba: is a majestic dirge, representing pine trees near a catacomb in Campagna. Lower orchestral instruments, plus the organ pedal at 16' and 32' pitch, suggest the subterranean nature of the catacombs, while the trombones represent priests chanting.

3. I pini del Gianicolo: is a nocturne set near a temple, on the Janiculum hill, of the Roman god Janus. Double-faced gods open large doors and gates, marking the beginning of a new year. Respighi takes the opportunity to include the actual sound of a nightingale, something that had never been done before.

4. I pini della Via Appia: portrays pine trees along the great Appian Way. Misty dawn: a legion advances along the Via Appia in the brilliance of the newly-risen sun. Respighi wanted the ground to tremble under the footsteps of his army and he instructs the organ to play bottom B flat on 8', 16' and 32' organ pedal. The score calls for buccine - ancient trumpets that are usually represented by flugelhorns. Trumpets peal and the consular army rises in triumph to the Capitoline Hill.