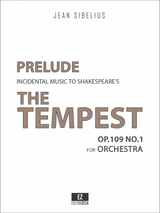 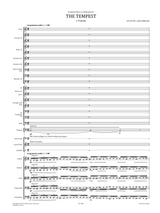 The Tempest - Incidental Music to Shakespeare´s Play, Prelude Op.109 No.1 was written in 1925-26. The music is said to display an astounding richness of imagination and inventive capacity, and is one of Sibelius's greatest achievements.

The Overture (also known as the Prelude) has been described as "the single most onomatopoetic stretch of music ever composed". Sibelius published the Overture as a separate piece, and arranged two suites from the music, comprising 19 pieces. These suites condensed and combined items from the stage music, sometimes in ways that obscure the drama. It is in the form of these suites that the music has been most frequently heard in the concert hall and on recordings. Various recordings do not stick to the formal suites but include other items.

The Suites will be published by Editon Zeza at a later date.

Sibelius - Serenade No.2 in G minor Op.69b for Violin and Orchestra