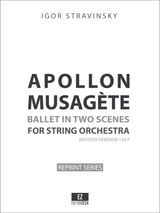 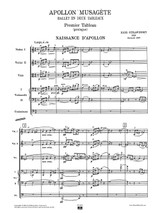 Apollo (originally Apollon musagète and variously known as Apollo musagetes, Apolo Musageta, and Apollo, Leader of the Muses) is a neoclassical ballet in two tableaux composed between 1927 and 1928 by Igor Stravinsky. It was choreographed in 1928 by twenty-four-year-old George Balanchine, with the composer contributing the libretto. The scenery and costumes were designed by André Bauchant, with new costumes by Coco Chanel in 1929. The scenery was executed by Alexander Shervashidze, with costumes under the direction of Mme. A. Youkine. The American patron of the arts Elizabeth Sprague Coolidge had commissioned the ballet in 1927 for a festival of contemporary music to be held the following year at the Library of Congress in Washington, D.C.

The story centres on Apollo, the Greek god of music, who is visited by three Muses: Terpsichore, muse of dance and song; Polyhymnia, muse of mime; and Calliope, muse of poetry. The ballet takes Classical antiquity as its subject, though its plot suggests a contemporary situation. It is concerned with the reinvention of tradition, since its inspiration is Baroque, Classical, or even post-baroque/rococo/galant.