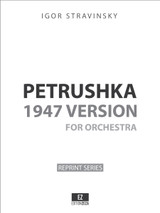 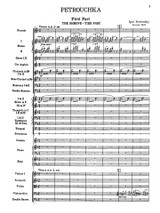 This is the 1947 Revised Version, as scored by the composer.

Petrushka is a ballet and orchestral concert work by Russian composer Igor Stravinsky. It was written for the 1911 Paris season of Sergei Diaghilev's Ballets Russes company; the original choreography was by Michel Fokine and stage designs and costumes by Alexandre Benois, who assisted Stravinsky with the libretto.

In 1946, he thinned the ballet's scoring, in part because the original was not covered everywhere by copyright. The rapid continuous timpani and snare-drum notes that link each scene, optional in 1911, are compulsory in this version, which was published in 1947. The Ballerina's tune is assigned to a trumpet in 1946 in place of a cornet, and the 1946 version provides an optional fff (fortississimo) near the piano conclusion. Stravinsky also removed some difficult metric modulations in the first tableau.