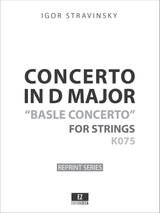 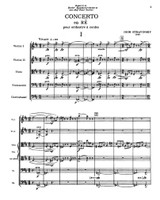 Concerto in D ("Basle") for string orchestra was composed in Hollywood between the beginning of 1946 and 8 August of the same year in response to a 1946 commission from Paul Sacher to celebrate the twentieth anniversary of the Basler Kammerorchester (BKO—in English, Basel Chamber Orchestra), and for this reason is sometimes referred to as the "Basle" Concerto.


The concerto has been choreographed several times as a ballet, first by Dore Hoyer at the Hamburg State Opera in 1950. Later ballet versions were made by Jerome Robbins, under the title of The Cage in 1951, by Werner Ulbrich, as Attis und die Nymphe at the Württembergische Staatstheater, Stuttgart, in 1959 and by Aimé de Lignière at the Royal Ballet of Flanders, as Acht in 1973.
The concerto has three movements:
Vivace
Arioso: Andantino
Rondo: Allegro