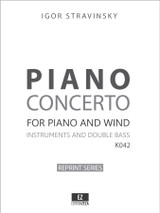 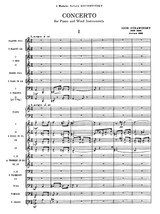 The Concerto for Piano and Wind Instruments was written by Igor Stravinsky in Paris in 1923–24. This work was revised in 1950.  It was composed four years after the Symphonies of Wind Instruments, which he wrote upon his arrival in Paris after his stay in Switzerland. These two compositions are from Stravinsky's neoclassical period, and represent a departure from the composer's previous Russian style, in which he produced works such as The Rite of Spring.

The concerto, as described in its name, is scored for solo piano accompanied by an ensemble of wind instruments. The instrumentation of the wind section is what would be found in a standard symphony orchestra: two flutes, piccolo, two oboes, cor anglais, two clarinets, two bassoons (second bassoon doubling contrabassoon), four horns, four trumpets, three trombones, and tuba. The work also calls for double basses (divisi in 3) and a timpano. Although combining winds and piano was unusual at the time, the form had been explored earlier in the twentieth century and would be explored later.