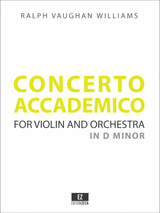 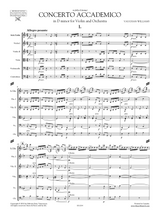 This work is clearly an homage to Bach, specifically to his Concerto for Two Violins in D Minor, a composition Vaughan Williams deeply loved and admired. The concerto is cast in three movements, with the lively outer panels framing a serene Adagio.

Vaughan Williams borrows a rhythmic idea from Bach's A minor Second Violin Concerto to open the first movement. Marked Allegro pesante, this is one of the composer's busiest, most vibrant instrumental movements.

The Adagio is dreamy and relaxed in mood, and features mostly delicate, triadic harmonies. The violin writing often resembles that in the composer's earlier masterpiece, The Lark Ascending (1914; rev. 1920). In the central part of the movement a climatic episode of a most celestial character appears to stir this otherwise serene musical landscape. On its return this same material sounds less forceful and a bit darker.

The Presto finale opens with a theme that is pure Vaughan Williams, a jig tune taken from Act II, scene 2 of his opera, Hugh the Drover (1910-14), which had premiered in July 1924, shortly before the composer began work on this concerto. At less than four minutes, this is the shortest movement, but its bustling energy never flags, its folk-like spirit permeating the whole movement, leaving relatively little to identify with Bach.