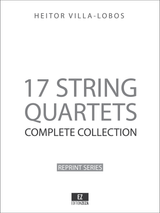 Villa-Lobos wrote a total of 17 string quartets and was working on an eighteenth at the time of his death in 1959. None of the quartets appear as mere compositional exercises but rather as displays of Villa-Lobos's ability to synthesize his wide-reaching influences.

Their composition spans more than four decades and are filled with the composer's skillful experiments with tonality, polyrhythm, color, sonority, texture, and, of course, his much beloved and ubiquitous Brazilian folk idiom.