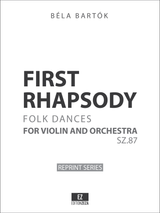 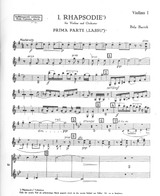 The First Rhapsody is dedicated to Hungarian virtuoso violinist Joseph Szigeti, a close friend of Bartok. Bartók evidently composed both rhapsodies purely as a personal gesture, rather than on commission, and did so without telling anyone until they were both completed.

Both rhapsodies exemplify a mode of composition using peasant-music sources, described by Bartók as taking an existing melody and adding an accompaniment together with some introductory or ending material, in such a way that the newly composed matter is strictly secondary—never competing with the folk material for prominence. This was acknowledged in the scores of the early editions, which bore the subtitle "Folk Dances" (Walsh 2005, 235–36). Bartók's objective was to transplant the entire style of Eastern-European fiddle playing into the Western concert context. In order to further this project, he insisted that Szigeti listen to the original field recordings from which the melodies were transcribed (Laki 2001, 141). The Rhapsody uses the same slow–fast (lassú—friss) paired movements of the popular Hungarian verbunkos (recruiting dance) found in the earlier Rhapsody for Piano of 1904, and to which he would later return in the first movement of Contrasts in 1938 (Losseff 2001, 124). Bartók specified that each of the movements can be performed separately—not only the fast second movement but also the more serious slow opening movement of each rhapsody (Walsh 2005, 235).