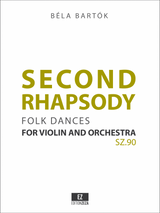 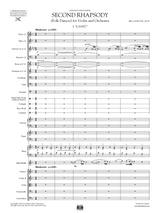 Rhapsody No.2 SZ.90 is the second of two folk dances (often called "Hungarian Rhapsodies") for Violin and Orchestra that Bartók wrote in 1928. The 2nd Rhapsody is dedicated to the violinist Zoltán Székely, the founder of the Hungarian String Quartet.

The piece draws its stylistic elements from the Czardas, the national dance of Hungary. A major characteristic of the Czardas is the alternation of slow and fast sections and so this piece was written in two movements: the first movement named Lassú (the slow movement) and the second movement named Friss (the fast movement). The title, "Rhapsody", is a reference to the dramatic contrasts between the movements.