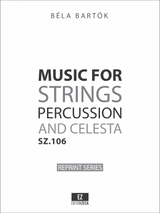 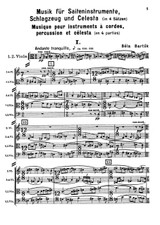 
Bartók divides the strings into two groups which he directs should be placed antiphonally on opposite sides of the stage, and he makes use of antiphonal effects particularly in the second and fourth movements.

The piece is in four movements, the first and third slow, the second and fourth quick. All movements are written without key signature:
1. Andante tranquillo
2. Allegro
3. Adagio
4. Allegro molto

Extra information:
REPRINT SERIES, there may be handwritten markings.