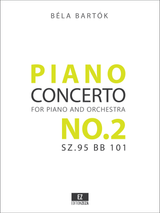 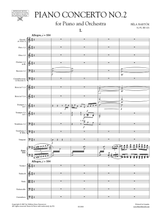 Bartók’s less hair-raising, but longer, companion to the 1926 concerto. He said he wanted a work “less bristling with difficulties for the orchestra and whose thematic material would be more pleasing”.

He characterized this concerto’s themes as ‘“light and popular”, which, given Bartók’s recent history, they are – comparatively. The concerto is composed of three movements:

On the first page of the harshly brilliant opening movement, two recurring – in this movement and in the finale – motifs are hurled out: the first by solo trumpet over a loud piano trill and the second, its response, a rush of percussive piano chords. A series of contrapuntal developments follows, as does a grandiose cadenza and a fiercely dramatic ending. The slow movement is a three-part chorale with muted strings that has much in common with the “night music” of the composer’s Fourth Quartet (1928), but with a jarring toccata-scherzo at midpoint. The alternatingly dueling and complementary piano and timpani duo – the timpani here muffled, blurred – resume their partnership from the first movement, now with optimum subtlety.
The wildly syncopated rondo-finale in a sense recapitulates the opening movement. At the end, Bartók shows us the full range of his skill as an orchestrator with a grand display of instrumental color. The refrain – the word hardly seems appropriate in the brutal context of this music – is a battering syncopated figure in the piano over a twonote timpani ostinato.