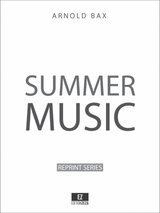 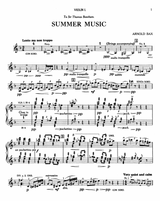 It is unusual among Bax's tone poems in that it is written for a much more normally sized orchestra than he was prone to demand. In this case the heavier brass -- usually the orchestral section most tasked and taxed in a Bax orchestral work -- is represented by a solitary trumpet.

This is one of the most Delian of the composer's pieces, with the strings offering a harmonically complex and intricately structured murmuring accompaniment to one of Bax's most lyrical melodies, passed from solo horn to cor anglais. It is a long way from the sense of apocalypse and futility which pervades much of the rest of his music at this period. In his own words, Summer Music evokes "...a hot windless June midday in some woodland place of Southern England."