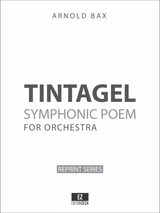 Tintagel is a symphonic poem composed by Arnold Bax in 1919; it is perhaps his best-known orchestral work.

Bax had visited Tintagel Castle during the summer of 1917, accompanied by pianist Harriet Cohen, with whom he was carrying on an affair at the time; he dedicated the work to her. He composed two poems on the theme, and the work is, to a certain extent, a sonic illustration of these. According to Bax, the music is meant to depict a castle perched high on the rocks, battered on a sunny summer day by the Atlantic Ocean. A certain Celtic flavour is apparent in the music; this provides the basis for one of the two themes in the work, meant to recall King Arthur and his connection to the castle, and which quotes a motif from Richard Wagner's opera Tristan und Isolde;[1] the other theme depicts the sea.

Bloch - Poems of the Sea for Piano