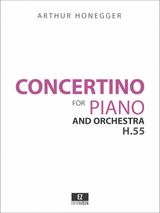 In reality a ten-minute neo-classical piano concerto in two movements, Honegger's Concertino sports severe "wrong note" harmonies and complex counterpoint within what is actually a rigid framework. Two movements further subdivide into four, and the effect is a full-scale but tiny piano concerto.

Two movements further subdivide into four, and the effect is a full-scale but tiny piano concerto. Overall, the work is a sort of miniature jewel of a concerto which displays Honegger's gift in full maturity and shows both the extent to which he departed from the Impressionism of some of his countrymen, and the effectiveness with which he managed the neo-classical form. As one of his mature works, the piece is somewhat complex and demanding, especially in its rhythmic shifts and contrasts.