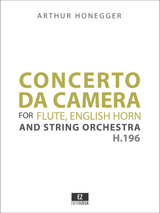 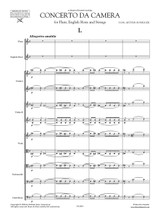 Concerto da camera (H 196) is a concerto in three movements for the unusual combination of flute, English horn, and string orchestra written by Arthur Honegger late in his career in 1948.

Honegger described the movements as such: "The first part is based on very simple themes of popular character which stand out against the background of string harmonies from which they arise. The Andante contains a melodic theme, which progresses from solemnity to a sharp brilliance in an atmosphere of somewhat melancholy calm. The finale has the feeling of a scherzo."The soloists perform largely in counterpoint rather than in imitation and dialogue, especially in the second movement where the flute flutters 32nd notes over and around the English horn’s warmly expressive lines.