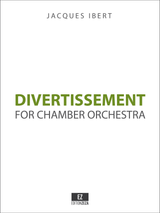 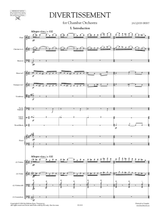 Divertissement is the French equivalent of “diversion,” in the sense of amusement or entertainment; this title Ibert gave to the concert suite he drew from his incidental music to a 1929 production of one of the greatest French farces, The Italian Straw Hat, by Eugène Labiche.

Labiche's comedy, a classic of its type, recounts the adventures of a nervous bridegroom on his wedding day as he attempts to save a woman's honor by searching for a replacement for a hat he inadvertently ruined, all the while concealing his frantic mission from his intended bride, her suspicious father, and the entire wedding party. Along the way, disguises, unlikely deceptions, misunderstandings, and mistaken identities propel the action to ever greater frenzy before a tidy resolution.

The confluence of periods in the Divertissement -- a genre with roots in the Baroque applied to a nineteenth century comedy by a twentieth century composer -- is reflected in the parodistic pastiche that informs the work's six sections: