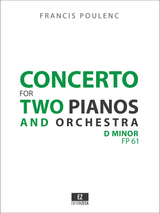 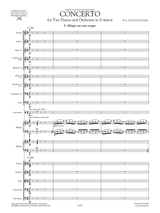 Often described as the last work of Poulenc’s early period, the composer himself wrote to the Belgian musicologist Paul Collaer: "You will see for yourself what an enormous step forward it is from my previous work and that I am really entering my great period."

The concerto's recurring moto perpetuo, modally inflected figurations are clearly inspired by Poulenc's encounter with a Balinese gamelan at the 1931 Exposition Coloniale de Paris. Additionally, the work's instrumentation and "jazzy" effects are reminiscent of Ravel's G major Concerto, which was premiered at Paris in January 1932. Inevitably, comparisons have been drawn with Mozart’s Concerto in E-flat for two pianos, K. 365, but the slow movement Larghetto's graceful, classically simple melody and gentle, regular accompaniment have reminded some writers of the slow movement of Mozart's C major Piano Concerto, K. 467.
Poulenc wrote in a letter to Igor Markevitch, "Would you like to know what I had on my piano during the two months gestation of the Concerto? The concertos of Mozart, those of Liszt, that of Ravel, and your Partita".

Bruch - Violin Concerto in D minor No.2 Op.44 for Violin and Orchestra