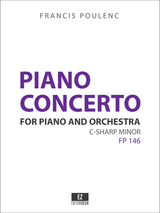 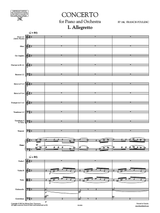 Although cast in three movements, it is a world away from the classical concerto. This is largely on account of its first movement (allegro assai: “very jolly”, literally!), which is divertissement, pure and unadulterated.

Apart from the opening theme, a typically liquid melody, lightly garnished with ginger, which reappears at the end of the movement, it is the musical equivalent of a Paris fashion show­: a succession of ear-catching tunes, each of which is paraded for our amusement then lost to view forever - which perhaps accounts in part for the general air of wistfulness?

The nostalgic mood is carried forward into the second movement (andante), whose main theme weaves its simple charms over a pulsing accompaniment somewhat reminiscent of  (though in a rather different context) a passage in the first movement of Shostakovich's Fifth Symphony. The finale (Rondeau à la française) breaks the spell, only to weave one of its own through its use of the rhythm of the maxixe (a tango popular during the 1920s).

Set of Parts:
Includes Strings count 4.4.3.3.2 (Solo in Score). For Extra Strings and Scores contact us.