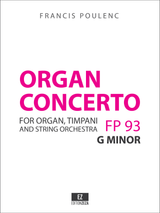 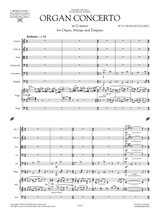 Poulenc's Organ Concerto has become one of the most frequently performed pieces of the genre not written in the Baroque period.

The piece uses such comparatively small forces, relative to Poulenc's other concertos (the Concert champêtre used a full orchestra as accompaniment), so that the piece could be played in a quite small space with an organ, such as Princess Edmond's salon, that were quite popular in France at the time. The piece would have been premiered on a Cavaillé-Coll instrument, as the company supplied many organs to private customers, one of whom was the princess.

The piece is just over 20 minutes in duration and consists of a single continuous movement with seven tempo marks. Respectively, these are: Andante, Allegro giocoso, Subito andante moderato, Tempo allegro. Molto agitatio, Très calme: Lent, Tempo de l'allegro initial and Tempo d'introduction: Largo. Each movement often differs substantially in style, tone and texture. For example, the opening movements are loud and quite violent, with substantial organ chords; yet the following middle movements are much calmer, softer and more emotional.