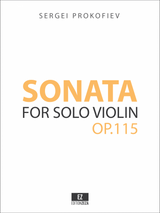 It is a little-known fact that Prokofiev's Op.115 Sonata was not originally intended as a work for solo violin, but rather for a group of twenty or so violinists playing in unison, a prevalent practice in the pedagogy of student violinists in Russia, of a group playing a solo violin part in unison.