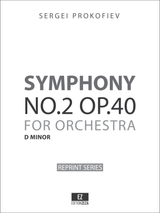 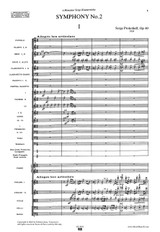 Prokofiev wrote his Symphony No. 2 in D minor, Op. 40, in Paris in 1924-25, during what he called "nine months of frenzied toil". He characterized this symphony as a work of "iron and steel".

Prokofiev modeled the symphony's structure on Ludwig van Beethoven's last piano sonata (Op. 111): a tempestuous minor-key first movement followed by a set of variations. The first movement, in traditional sonata form, is rhythmically unrelenting, harmonically dissonant, and texturally thick. The second movement, twice as long as the first, comprises a set of variations on a plaintive, diatonic theme played on the oboe, which provides strong contrast to the defiant coda of the first movement. The subsequent variations contrast moments of beautiful meditation with cheeky playfulness, yet the tension of the first movement is never far away and contributes an ongoing sense of unease. The last variation integrates the theme with the violence of the first movement, reaching an inevitable climax. The symphony ends with a touching restatement of the initial oboe theme, eventually dispelled by an eerie chord on the strings.

The symphony is in 2 movements, lasting 35–40 minutes: