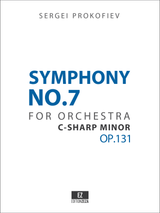 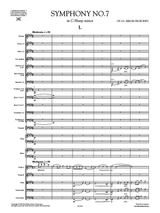 The Seventh Symphony was Prokofiev's last completed major work. It was written for the Soviet Children's Radio Division, but the simplicity of the composer's approach in the work often conceals deeper expressive currents.

Though the Symphony adheres to the typical four-movement layout - opening movement in sonata form, scherzo, slow movement, and finale - it is hardly an easy work harmonically, with its home key of C-sharp minor.

Most of the symphony is emotionally restrained, nostalgic and melancholy in mood, including the ending of the Vivace final movement. However, Prokofiev was later convinced to add an energetic and optimistic coda, so as to win the Stalin Prize of 100,000 rubles (because of official disapproval, Prokofiev was living in poverty at this time). Before he died, Prokofiev indicated that the original quiet ending was to be preferred.

The premiere was well-received, and in 1957, four years after Prokofiev's death, the symphony was awarded the Lenin Prize.